Have you received or observed the Mid-Atlantic Center for Emergency Management (MACEM) challenge coin? This small medallion portrays the core values in which guides the MACEM, its leaders, staff, and all those who become a part of the MACEM Team. Notice the insignia that identifies the MACEM and the values of HONOR, INNOVATION, EDUCATION, and SERVICE on the front of the coin. The back of the coin features MACEM’s home entity of Frederick Community College in Frederick, Maryland. The MACEM presents challenge coins in recognition of special achievement supporting public safety.

Perhaps you have heard challenge coin legend. “One legend about the challenge coin, dating back to World War I, claims that a wealthy officer had bronze medallions made with the flying squadron’s insignia on them. The officer handed out these medallions to his men, and one of them was shot down over Germany and captured. He escaped to France, but the French believed he was a spy and sentenced him to execution. He proved his identity by using the medallion and was saved from execution and sent back to his unit” (https://www.reference.com/government-politics/history-challenge-coin-fb96c08312bb29e3).

Challenge coins are customarily used in the military and public safety sector professions and some civilian positions in government. “Presidents George W. Bush, Bill Clinton, and Barack Obama have all had challenge coins minted to present to diplomats of foreign countries and White House guests. Armed services members have multiple opportunities to receive various challenge coins throughout their career” (https://www.reference.com/government-politics/history-challenge-coin-fb96c08312bb29e3).

Thank you to all men and women affiliated with the MACEM and striving to fulfill its mission and embody its core values. Contact us to learn how you can also become a part of the MACEM Team! 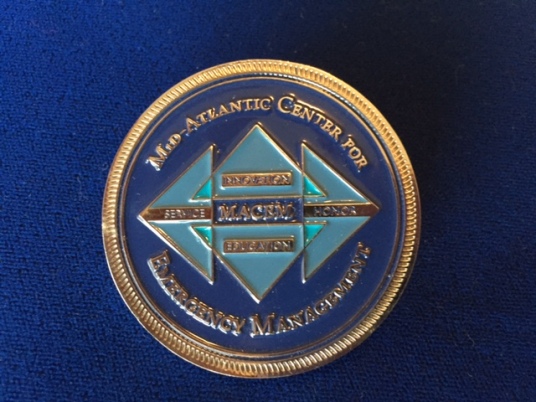 The Mid-Atlantic Center for Emergency Management & Public Safety Programs at Frederick Community College provides academic and career credentials, professional services, and community engagement in emerging high-intensity disciplines. It serves as a resource to connect, secure, and prepare both virtual and physical environments. Guided by the ideals of equity and justice, it provides education, training, and services to meet the challenges of developing a safe, prepared, and resilient community, state, and nation. View all posts by MACEM&PS